The Distorted Truth In Glitch


Glitch is honest. It's raw. It's the visual shorthand for the digital underground. Menacing, uncomfortable and oddly macho-geek, It's also beautifully inconsistent and a perfect foil for streamlined digital media culture. Fashion re-appropriates, design manipulates and art creates. This is all part of the constant remixing of culture, perfect for the feedback loop of glitch. Is glitch the last true art form or is it just a ghost in the machine? Perhaps our future depends on the kind of thinking being applied to the recycling of digital material and perhaps those working with the idea of disruption will balance an increasingly owned digital landscape. It's happening in reality...


'Forms of graphic 'distortion' are now common to the internet, perhaps complementary to the almost bathroom-like sterility of web standards, or to demonstrate the infinite shaping and reshaping of memes and visuals as part of an evolutionary process authored by everyone and no one.' Metahaven


The Dirty New Media
A New Ecology for the Citizen of a Digital Age from Nick Briz on Vimeo.

“There are those who would say that glitch art is a form of resistance, not just a representation,”  explains Jon Cates, New Media professor at The School of the Art Institute of Chicago. Chicago is a centre of glitch momentum in the US, if not the world and Cates is at the vanguard of it's discovery. “Jason Scott, historian and archivist for Archive.org, has called our Chicago-based community the 'birthplace of dirty new media' and Rosa Menkman has written that we foreground glitch art in a way which has become a 'pivotal axis' of the international glitch scene” explains Cates.
One way on engaging a global audience has been the recent birth of Uglitch an upload site based on the YouTube model. Site founder Benjamin Gaulon aka Recyclism explains the site's reference to YouTube and its users by saying  “We are building a database of glitch GIFs that can then be used for new work by us and others, we are starting to see similar types of uploads [to YouTube] with  short edited film clips and the like to create glitches”.

'Having networks that facilitate the sharing and creation of images (Tumblr, dump.fm, and Google+) allow communities to form and build memetic value in a hyper-connected fashion. Information splicing with information.' Travis Stearns

The GIF file format has been around since the birth of the internet and is a natural means for carrying visual glitches. Designer Travis Stearns explains the attraction: “their aesthetic is something digital natives are quite familiar with, but as an accessible art and communication medium they haven't been given much attention until this current point where democratisation of the tools for creating animations are universal and available to everyone. Having networks that facilitate the sharing and creation of images (Tumblr, dump.fm, and Google+) allow communities to form and build memetic value in a hyper-connected fashion. Information splicing with information.”

Style V Substance
'Many artists do see glitch as a tool for critiquing popular culture, but many see it simply as a nostalgic--8bit generation--aesthetic, others as digital psychedelia, others as a lens through which to dissect language + linguistics, and others yet, as a purely structuralist/materialist practice.' Nick Briz

“Over the past couple of years the visual glitch has become commodified. It's now just another filter in the designer's arsenal, at least as far as the gliche (glitch cliche) is concerned.” notes Ant Scott one of the first glitch VJ's now staunch artist under the name Beflix. The Glitch community is as fractured and distorted as the work it produces. GLI.TC/H the annual global new media festival that brings everything together. Nick Briz co-founder and co-organiser of the festival explains the diversity of the scene and the balance between commercial and 'punk ethos as“[It's] evident from all the debates that glitch.errz partake in glitch art for very different reasons. We had plenty of 'punks' present but we also had designers who work at ad agencies.”


So what of the commercialisation of the genre? According to Briz this can be split up into two different concepts. One is the commodification of genre, the other is it's commercialisation.

"Many glitch artists believe that glitch art can not become a genre, it defies codification in it's form" explains Briz, "That to combine the two words (glitch + art) and to imply that it's a genre or category is to undermine glitch's potential. They believe glitch is at it's best when it is random, chaotic, unexpected and unpredictable. While I appreciate this position and support the sentiment I do think it's a bit problematic and ultimately not true... of course glitch art is a genre, still it's important to address that such a debate is being had.

' I got pretty upset when Kanye West released his video "Welcome To Heartbreak" almost exactly three years ago. I thought it was the end of glitch art' Nick Briz

Next is it's commercialisation. I'm not a big fan of this word, it simplifies a complicated process with inescapably negative connotations.  Rather, I think popularisation is a better term, it's a slightly more complex perspective. I got pretty upset when Kanye West released his video "Welcome To Heartbreak" almost exactly three years ago. I thought it was the end of glitch art. I had been making this kind of work for a few years, it was a complicated process and one I felt could only be executed with careful consideration of the material. I thought his video would be the end of such a process and the beginning of a commercialized gimmick. And in some ways it was, datamoshing (the technique he "popularized" but by no means invented) got really "hot", and hundreds of shit videos got uploaded to youtube in its wake. At the same time it transformed a community of maybe a few dozen artists (that I knew of at least) into a few hundred artists."

KANYE WEST "Welcome To Heartbreak" Directed by Satrom from jonsatrom on Vimeo.

It's not just Kayne West that's tipping the scale, more recently CK One wanted to shock and sniffed out glitch to add some credibility to their campaign...


Music and entertainment need not be pimped and perfumed. Andrew Benson teaches at the Design and Technology department at San Francisco Art Institute and works for a number of musicians including the masterfully awkward Aphex Twin.

Following a more mainstream alternative, a well travelled field of light artists working with musicians, Benson explains the glitch scene in San Francisco as “The bay area has a really rich history of experimental non-narrative cinema. I  hate to say it but I also think the popularity of dubstep has been really good for introducing kids to weird sounds, glitchy artefacts and getting them engaged.”  Benson is at the top of his field, innovating live performance whilst handling engagement with a wider audience, manipulating and creating aesthetic.


The graphic design community manipulates the aesthetics of glitch, harking back to halcyon days Melvin Galapon is a UK-based designer who works on both commercial and artistic projects using glitch and dot matrix as an aesthetic basis for his work. He suggests “there is a kind of movement where using glitches and dot matrix is retro-cool as the generation of people currently creating work come from an era where this was part and parcel of the technology we are all a part of"


We're comfortable looking at screens and connecting to networks that show nothing but beauty and an obsession with perfectionism. To this end, distortion is closer to the reality of our fractured, temporal information society.' Travis Stearns


Explaining the relationship that designers have with glitch Travis Stearns explains "I relate distortion in the current context of the internet to punk communication art, particularly xerox flyers and zines. HD screens are hanging everywhere now. The new objects of desire, our smart phones and iPads, favor minimalism and vast white space. We're comfortable looking at screens and connecting to networks that show nothing but beauty and an obsession with perfectionism. To this end, distortion is closer to the reality of our fractured, temporal information society."

The Accidental Anarchists
The design team at Bloomberg Businessweek have shown a passion for observing the glitch, error and disruption of graphics by recently publishing their printer errors, entitled Printer Tragedies as a batch of artwork on Flickr. This light hearted look at digital errors reveals a deeper attraction for 'wrong' graphics.
Jennifer Daniel, designer for BBW explains “I guess what I'm attracted to is how these visual interruptions create spatial correlations that have always existed but no one else saw. Being able to find something that no one else has articulated is what so many creative consciously try to do. And it turns out you don't even need to have a conscious to do it.” 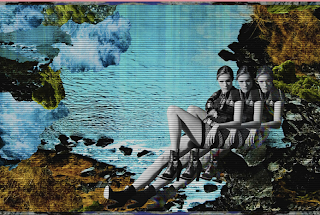 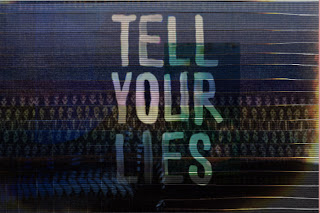 Eco and media conscious advertising campaigns have also adapted the 'warts and all' transparency of glitch. AnitaFontaine, digital artist and Art Director of Champagne Valentine explains her work for fashion brand Edun: “We were inspired by the raw textures from the collection and we wanted to make a digital experience that felt more organic than digital. We love the effect of being able to scratch away the truth behind the lies, or vice versa, and literally being able to do that as means of moving through the experience.”


Speaking of the relevance to glitch and branding, Fontaine suggests “glitch and disturbance makes a work or experience seem imperfect and therefore more real. It's important that we mix the real and the virtual, blurring the boundaries - it's what people are used to now in these new hybrid realities we immerse ourselves in everyday.”

Transparency also has a political connotation and the self appointed bastion for this is the notorious Wikileaks organisation. Dutch design company Metahaven took on the job of fund raising for the organisation and produced a number of products including a scarf, complete with distorted Louis Vuitton graphics as well as mugs and T-Shirts. The work was recently featured in an exhibition at the Museum of The Image (formerly The Graphic Design Museum) in Breda, Netherlands.

As for far reaching impact of glitch beyond graphics, Benjamin Gaulon aka Recyclism, has this to say: “current technological design strategies, based on the notion of disposable devices and planned obsolescence, need to be challenged in order to find more sustainable models. By exploring other routes such as hardware hacking and recycling strategies of obsolete technology I believe we can to develop new sustainable models.”


Glitch is not disposable, it is the error of our digital ways if we think it is.

This is still my place to write from time to time but you can also find me at... ROBERTURQUHART.COM